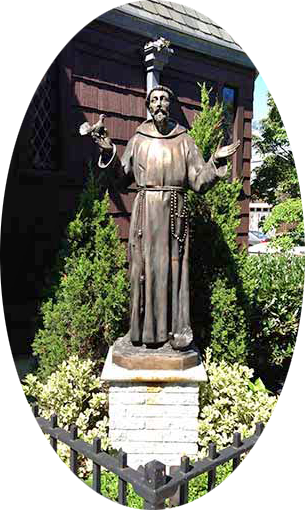 Saint Francis is called the little poor man of Assisi. He was born in the year 1182 in the town of Assisi in Italy. His father was a very wealthy merchant of Assisi. Francis was very joyful, soft-hearted and loving by nature, so he had many friends. All the noble men’s sons were his companions.

Brought up in great wealth and luxury, Francis spent a considerable portion of his wealth in extravagant pleasures. He used to drink and party with the young princes of the land.

One day while joking and laughing with his friends Francis was approached by a beggar who came along crying for alms. Francis, who was very compassionate, gave whatever he had in his pocket to the beggar. His companions mocked him for his charitable act. Dispassion dawned in his heart. The sight of the beggar set him thinking about the poverty and misery of mundane life and he began to give much money to the poor. His father thought that Francis was crazy wasting his money and rebuked him.

Sometime after this, Francis was sick in bed for many months on account of some serious disease. He was about to die. The nature of Francis was entirely changed during that time as he spent much time praying and asking for guidance as to his future. He made a strong determination to renounce his old way of living to tread a life of purity and to dedicate his life to the service of humanity and nature which he saw as a manifestation of God.

As soon as Francis got well, he informed his parents of his determination. They were disappointed and became angry with Francis. Francis gave up his old ways, threw away his expensive cloths and began to serve the greater good of all beings. He distributed clothes, goods and money to the poor. His father was very much annoyed at his son. He said, “Is this the gratitude you show to me ? I labored hard and amassed wealth which you are now lavishly wasting it on these miserable people”.

Francis’ friends mocked at him and teased him. His father turned him out of the house. Francis lived like a beggar. His old friends even pelted him with stones and mud. He bore all of these things with patience and began a life of simplicity wearing simple clothing and eating simple food.

Living in a cave in the mountains of Assisi Francis spent his time in prayer and meditation for two years. Some kind people gave him food, but very often he had nothing to eat at all.

Francis was very humble and loved all of God’s creatures. He loved birds animals, plants, trees and nature itself. He loved the depressed and the outcastes. He treated the birds, the beasts and all beings as brothers and sisters.

Francis went from village to village preaching the love of God, even giving teachings to the animals. Francis once liberated two lambs tied to the shoulders of a farmer, who were bleating pitifully on their way to market where they would be slaughtered. He removed worms from a busy road so that they might not be crushed under the feet of the passersby. (You will find many other stories of St. Francis and animals in Sharon’s articles throughout this website.)

Francis invited people to join him in his life of service if they were willing. Bernard, a rich man of Assisi, was very much attracted by the saintliness of Francis and joined him. He was the first follower of Francis, placing all his wealth at the altar of God. Eleven others also joined Francis, including St. Clair who like Francis left a wealthy life of luxury to care for the sick and underprivileged. Together these eleven distributed all their wealth to the poor traveling all over Italy preaching, teaching, healing and blessing wherever they went.

The gospel of kindness and love of Francis soon spread all over Europe and earned for him the name of St. Francis. People called him the little poor man of Assisi.

St. Francis collected many followers and founded the Order of Mendicant Friars or Franciscans. The members of this Order take a vow of poverty, chastity, love and obedience. St. Francis gave up his mortal life in 1228.

The followers of St. Francis built a beautiful church round him on the hill of Assisi, the hill he so dearly loved. The influence of St. Francis and the sweet aroma of his life live on until this day.

The Relevance of St. Francis’ Teachings in Today’s World.

The Life and teachings of St. Francis of Assisi have great relevance to the many problems that we face today, especially in terms of our perception and treatment of fellow creatures and the natural world.

In his time, St. Francis was an antidote to the profane and dualistic beliefs of human superiority and separateness from the rest of Nature, a view of the world that is still widely held. Today, as we confront the secular materialism that was just emerging in his time, St. Francis is an inspiration and guide for the human relationship with and responsibility for the life and beauty of the planet.

The relevance of St. Francis’ teachings could not be more acute today as science, on the one hand, affirms the sacred unity and interdependence of all of life and, on the other, serves those industries and ideologies that are destroying this unity and interdependence. All who share concern for humanity and the protection of animals and Nature may be inspired by the life of St. Francis to do all they can to insure the future and integrity of Earth’s Creation.

The Prayer of Saint Francis

The simple prayer of St. Francis of Assisi provides for us a mold in which to cast our own life’s conduct and character. It provides a blueprint upon which to pattern our living in our thoughts, speech and actions within our day to day relationships with our fellow beings and with all life around us. Therefore, the prayer of St. Francis is a precious document for us, an indispensable, invaluable frame of reference by which to judge our own lives, and referring to which we can do the necessary to bring about the needed alterations and modifications for the upliftment and purification of our own daily life.

Adoration
Exposition of the Blessed Sacrament will resume on September 7th

Recitation of the Rosary
Monday - Saturday: 8:30 am

Click here to visit St. Francis of Assisi on "City of Churches"

All new families are welcome to the parish
and every family should be properly registered.

If you move or change your address,
please notify the rectory.